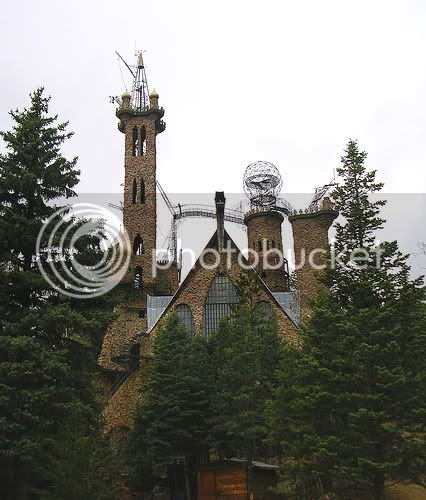 A co-worker and fellow artist, Adam Ogilvie, turned me on to this terrific 5-minute video in December. Entitled "Bishop's Castle," it is a well-edited introduction to Jim Bishop, an under-known contemporary artist.

Working alone on weekends (and four weekdays during the summer), the high school drop out and iron worker has constructed the eponymous Bishop's Castle in the Rocky Mountains, just outside the tiny, central Colorado town of Beulah. He began the project in 1969. At that time, he only intended to build a stone cabin. Forty years later, that cabin has grown into an incongruous marvel.

In the first two minutes of the video, Jim Bishop seems the very picture of artistic heroism. He works for the "glory of God" and for himself, and he characterizes his efforts as those of an honorable "peon." His astonishing creation is, as he puts it, a "one-man project, donation box basis." Bishop is justifiably proud of his remarkable accomplishment. The castle is not a funded public art project, yet it is far more impressive than either Christo's Central Park "Gates" or Eliasson's "Waterfalls."

Sadly, the castle construction has been fraught with legal battles (over insurance, material use and zoning) and even tragedy. In 1988, Bishop's four-year-old son, Roy, was killed at the castle site, apparently crushed by a tree that Bishop felled. One of the castle's towers is named after Roy, and Bishop says that he will inter his son's ashes there. Still, Bishop perseveres.

A rough-worn, but charismatic man, he tosses off memorable quips: "Engineering without money is ingenuity."; "I'm building this for myself. Basically, I'm an egotist." Early on, this rugged individualist act is endearing but, as the video advances, a darker side of Bishop is revealed. He rants about our nation's eroding morals and civil liberties and, although his convictions are not entirely without merit, his attacks on big government seem increasingly irrational.

Near the video's end, he yells from one of the castle's towers, seemingly possessed by a God-given vitriol. "I'm about to pass out. I'm getting...I'm....I just gotta get the blood in the right place now. Get that camera rolling! I'm doing work! I benefit everybody!...I'm the anti-devil!" Come again?

Still, like Jean Dubuffet, I believe that (with the exception of the hobbyist) those artists wiling away in obscurity, whatever their reason, are often producing exceptionally exciting work. Bishop is one such outsider, and his astonishing project deserves more attention.

(Note: The original edit of this post was posted on the blog, Letters From The Inquisition.)
Posted by Hungry Hyaena at 11:58 AM