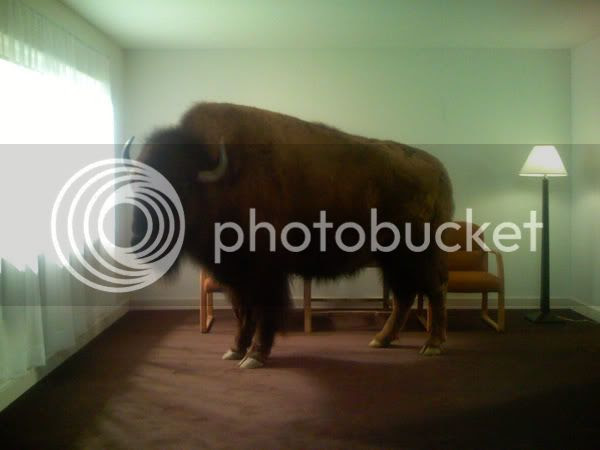 Doug Aitken
"Migration"
2008
Production still
25-minute video loop
Doug Aitken's haunting film "Migration," recently on view at New York's 303 Gallery, vignettes a number of North American animal species, each displaced in a banal motel room. These affecting scenes are intercut with shots of rail yards, highway on-ramps and motel exteriors. The film is a beautiful monument to our transient American existence. Indeed, whether moving homes or traveling for business, Americans are a peregrinating people; we move more often than citizens of any other industrialized nation. Aitken's decision to use wildlife to meditate on this phenomenon is apt. "Migration" is dream-like and hypnotic; it was hard to pull myself away, even when the 25-minute loop began again.

But when I picked up the gallery press release, I noticed that it described the critters Aitken filmed as "wild North American migratory animals." This jarred me from any reverie. In fact, of the twelve species that I recall offhand, only three - the American bison (Bison bison), caribou (Rangifer tarandus) and hawk (unidentified sp.) - might be deemed migratory, and it requires an almost comical ignorance of wildlife to think that an American beaver (Castor canadensis) or raccoon (Procyon lotor) will trundle hundreds or thousands of miles in search of more hospitable temperatures. I don't know if the press release mistake is Aitken's doing or that of a gallery employee. Of course, I hope it's the latter, but I'm dismayed either way.

Artists are generally urban animals. We congregate in cities so that we might feel connected to other artists and novel ideas. (Certainly, there are many exceptions, and the rural, more solitary approach to art-making is no less valid or vital. Different strokes for different folks, as the expression goes.) Some of us, though, strive to straddle the urban-rural divide. But those artists who, like me, spent childhood in the country and now reside in the city (or vice versa) often come to feel uneasy in both environments.

In my case, that sense of alienation is felt most acutely when I am reminded of urbanites' general ignorance of natural history. Despite their relatively impressive academic pedigree, urban artists and art enthusiasts are no exception. What's more, most city dwellers consider those individuals who do possess a knowledge of or curiosity about other species and ecosystems quaint; natural history is considered an esoteric and incidental subject. Among my friends, I'm the go-to-guy for questions about animal behavior or physiology, but these questions are cast as if the answers are more trivial than celebrity gossip. (My friends are often surprised that I can't name a fifteen-minute celebrity pictured on a newsstand rag, but don't think it odd that they can't identify but one or two of the city's common bird species.)

Indeed, when I mentioned my finding fault with the 303 Gallery press release, one artist friend chuckled and said, "Only you would even notice that." Sadly, that may be true, evidence of how very divorced urbanites are from the lives and lifestyles outside the proverbial city walls. Such a dismissive urban attitude is not merely an unfortunate reality for natural history buffs like myself; with an increasingly urban global populace, it bodes poorly for the future of ecological stewardship and, in turn, our human station.

(Note: The original edit of this post was posted on the art blog, Hungry Hyaena.)