Comparing Internet Art to Art Since 1960 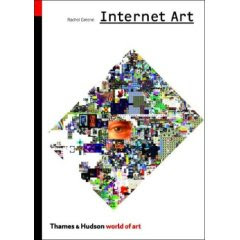 Now that I’m in school mode again I’ve been studying up on my art history. I’ve gone back to basics, returning to the Thames & Hudson “World of Art” series to try and get a broader understanding of recent art practices. I really like the no nonsense format of these Thames & Hudson books; the short length and survey style tends to reel in the art theory hyperbole and get to the point. For example, Michael Archer’s one paragraph sum-up (no diagrams!) of Rosalind Krauss’s “Sculpture in the Expanded Field” on pgs. 96 - 97 of Art Since 1960 is breathtaking. Way to go, dude!

In Art Since 1960 this brevity keeps things moving and gives the reader a real sense of progression through a period of art history usually viewed as hopelessly complicated. Personally, I found it really refreshing to get a linear narrative of recent art, without all the “end of history/postmodernism” talk that usually muddies the waters of contemporary art history. I mean, a pretty convincing linear narrative can be constructed from the past 40 years of art making. For instance, although Sherrie Levine’s photos might signal the theoretical “death of originality,” her work wouldn’t have been possible without the photo/text conceptualism of the 70’s. Like, although history or our experience of reality isn’t objective, the (North American/European) art world’s characterizations of “art” have unfolded in a well-documented and somewhat coherent manner, right? Blasphemy!!!

Anyways, in my reading I also went through Rachel Greene’s Internet Art, a survey of the past 15 years of online creativity. It’s pretty good, although kinda pretentious. Like where Art Since 1960 covered 40 years of massive change in 200 or so pages, Internet Art covers its 15 years in the same space. This creates some awkward equivalencies between the two texts, like when you compare (the excellent) Alighiero e Boetti’s name check in Art Since 1960 to the pages upon pages devoted to net artist Heath Bunting or the similar amounts of space devoted to Michael Fried’s brilliant “Art and Objecthood” and Wayne Bremser’s jokey essay on the similarities between Cremaster 3 and the video game Donkey Kong. These discrepancies might point towards a lack of critical perspective in Greene’s text, the “emerging” nature of internet art and its short list of quality work and criticism, and/or a need to fill out this Thames & Hudson book to the standard length. Whatever the reason, the brevity and clear trajectory achieved by Archer in Art Since 1960 is not present in Internet Art. 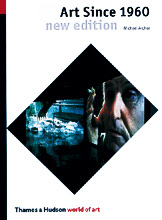 Nevertheless, Internet Art is an interesting read and made me see my usual concerns (What’s art? What’s innovative?) in a new light. Like, although there is no question that many of the projects in Internet Art are innovative, I took issue with people classifying some of these works as art. For example, in the last chapter entitled “Art for Networks” Greene outlines several works which are freely distributed visual maps documenting relationships between powerful institutions (financial, religious, political, etc.). Greene (via Brian Holmes) classifies the projects as art because they anticipate the eventual dismantling of these relationships through activism and “tactical media” (181-182). In this case, Greene assumes viewers will use the maps for the “good” (i.e. the destruction of capitalism) even though this information is also now available to more conservative concerns including the target institutions themselves (who are, no doubt, also online). I don’t want to get into an argument about the paradoxes of political activism here, but I do think that when work is classified as art its form better live up to its stated intentions.

And why do we have drag “art” into this argument anyway? I have no problem calling this work interesting and exciting activism, “tactical media,” whatever, but it doesn’t seem like art to me. Maybe it’s a readymade, but that’s the best I’ve got. I mean, why don’t the "artists" call this stuff political activism? Why consign it to the nebulous and politically neutered realm of “energy potential[s]” and “signs pointing to a territory that cannot yet be fully signified” (182)?

I’d track this misunderstanding back to online art’s (mis)reading of artists like Hans Haake and Marcel Duchamp, but whatever. I suspect it also has something to do with the money and institutionalized separation the art world bestows (“I can be pretty abnormal without having to isolatedly receive society’s contempt or punishments.” – Lucas Samaras), but whatever. In the end, I think my rejection of “art” works like these is due to my hesitation to jettison names like Picasso, DeKooning, and Nauman (all absent from Internet Art’s index) from our understanding of contemporary art. But, let’s face it, when Thames & Hudson says it’s art, it’s art. So, face your destiny and read these books. Like I said, they’re pretty good.