Someone has stolen Speperd Frairy iconic art, “HOPE.” But I don't think he can do anything about it. A web site is already dedicated to allowing people to add their image to the “HOPE” design to render an image similar to Frairy’s work.

I was so excited I looked up who is using it and found an interesting mix of people joining in on the fun. It is sort of like doing graffiti art on the internet.

So go to http://obamiconme.pastemagazine.com/ and get started on your own piece of history. You will be immortalized.

Some of the design templates reflect the “HOPE” poster closely and others just give it a hint of Frairy's work. The more I looked around the more I found uses of his work as a money making operation. An appropriation via an iconic piece of artwork. If you would like to see some more information on what you can do to get a copy of an artists work and mess with it, like painting a mustache on the “Mono Lisa,” see what Paste Magazine has to offer.

Paste Magazine says in a short explanation of what the site did after appropriating Fairey's work:
"Paste Magazine launched Obamicon shortly before President Obama's inauguration in January. The site allowed users to make images of them in the style of Shepard Fairey's iconic "Hope" poster.

The site received over a million visitors in its first month, with over 1.25 million

and the Atlanta Hawks." I wonder what Fairey thinks about this? This magazine is raking in the bucks from advertizing because of the interest in this little project.

Over a million webicons created. Now we have a new word for the dictionary webicons?

HOW I FOUND THE OBAMICON

Someone sent me an attachment of this band that has exploded the Internet with their music. The neo-punk-rap-rave-band Die Atwood (The Answer) has no respect. They not only took on the adoption of Frairy's work they use it for advertising for their music. However, Die Antwoord says they have no respect for anything political or commercial. Like punk and rap music, Die Antwoord spews its share of profanity at the audiences and airwaves. Some of the portrayals are sort of corny for me like their use of the Ninja. It is funny and goofy but some how it works. Their message is clear there language is not. 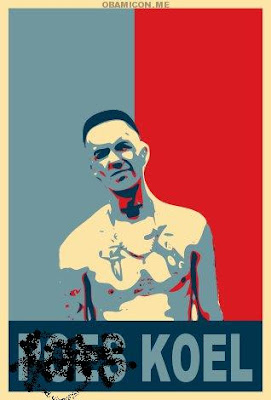 I spray painted over a word on the poster to the left because it is one of the seven dirty words a journalist is forbidden to use (thanks George Carlin). Although it is not the same spelling as in our culture it translates the same. If you haven't guessed what that word is I can give you the first letter, f. It would give me a lot of joy to have left the word as it was, but heck just Google it. Some people are very offended by these words so we must obey the law or should I say perceived law.

A bit of information on this band -- the members grew up in the same trailer park in and their music is about poverty, culture, hate and racism. Their use of English is difficult for me to understand. But I am sure I can guess what most of the words say. What I have seen is a group of people mimicking anything they can to get a response.

Let me get back to the art work the band evokes. What is interesting, besides the uses of Frairy's “HOPE” poster, was their visual art in their videos, posters, and mostly from their fans. Their Facebook page http://www.facebook.com/DieAntwoord is set up for fans to comment, share photos and to display some of their own art work. It looks nothing like my family's Facebook page, by the way. Some of this work is very good but you have to sift through a lot of band photos to get to pieces like the one below of Yolandi. 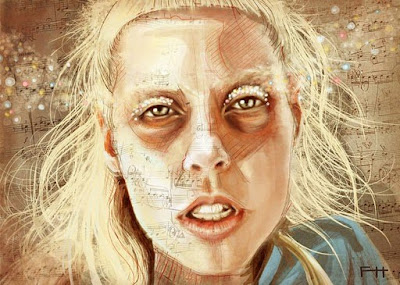 Just because the art is coming from the influence of music and it may be appropriated by armature artist. It could be classified into a genre of art much like Frairy’s graffiti art. The groups parody of contemporary genres of art and music. It funny and fresh. I can't say I am going to follow their current popularity on the "inter-web" Internet, but I do have a lot of questions about why they decided to use Frairy's work to portray their image. Maybe it just crossed the minds of the band members. Almost every aspect of this band is an appropriation. I am sure they would just say “F--- it.

It is very important to note sometimes the truth is better told by artists. The issues of racism in runs deep. We in my think we are century’s away from institutionalized racism; but are we?

“As 's democracy has matured the race issue has intensified, deepened, and become more problematic. It can still be expressed in the crudest possible manner, as happened last week when a white farmer in the province dragged a black man - with a wire tied to his ankle - for five kilometers behind his pick-up truck. The black man died, yet another victim of all-too-frequent race murders in a liberated .” Justice Malala, correspondent for the South African Sunday Times. 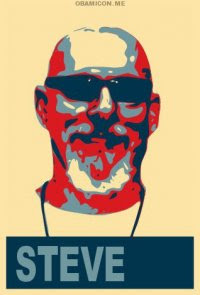 I hope you have time to take a peek at Paste Magazine and do yourself up into a piece of artwork. Send me your images as you do them and I will collect and post them to this blog.

My Facebook friend Steve took advantage of the Paste Magazine Obomicon me web site and did a nice job on his self portrait.

If you like to email me or send me your Obomicon me images send it to:

Actually 'p**s' is slang for female genitalia in Afrikaans, but the phrase you mention pretty much means 'f***ing cool'.

I am finding this site really informative, thanks :)