Peter Gerakaris earned a BFA from Cornell University’s College of Architecture, Art and Planning in 2003. Peter studied painting and architecture in Rome under the auspices of Cornell University, and subsequently established a New York City studio. He is currently an MFA painting candidate at the City University of New York’s Hunter College in Manhattan.

Gerakaris’ work has appeared in Beijing at Chinese Contemporary Gallery, The Bronx Museum of the Arts (NYC), Scope Art London (UK), and Rocketart Gallery (Australia)-- and several other venues. Gerakaris’ work also appears in various collections in the USA, Europe, China and Mexico. 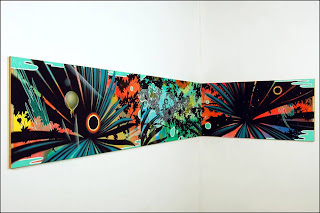 Brian Sherwin: Peter, you are currently a candidate in the City University of New York's Hunter College MFA Program. Can you tell us about your experience in the program? Have you had any influential instructors that you would like to mention? Have you collaborated with any fellow students while there?

Peter Gerakaris: The program’s very interdisciplinary, perfect for self-starters and the best deal around. Our studio facility is in a great location on West 41st Street, by Times Square and just 10 blocks North of Chelsea. We’re often described as a "gritty", "do-it-yourself" kind of place and I like how you’re not rushed through in two years like most MFA programs (three is average for most "Hunters").

Working with Prof. Sanford Wurmfeld specifically augmented my approach to color. Also, the intellectual curiosity and analytic rigor of Robert Morris and Robert Swain really raises the bar for students. Exposure to this helps one crystallize his/her own values and develop critical thinking. My artist-peers are wonderfully eclectic and yes, I’m working on a collaborative book right now. While the MFA program is the initial incubator, I’m positive these relationships will develop long after we’re out of school.

BS: As you know, I observed your art at the NEW INSIGHT exhibit at Art Chicago this year. The exhibit was curated by Suzanne Ghez. Did you enjoy the experience? What can you tell us about the selection process? Also, you mentioned that a gallery is interested in your work after observing your work at NEW INSIGHT-- do you have any further details about that?

PG: Susanne Ghez, the Director of the Renaissance Society at the University of Chicago selected 23 graduate artists from the country’s 12 "most influential Master of Fine Arts programs". Seven students at Hunter were initially nominated by the faculty—then Susanne Ghez chose two of us to represent each program. I was happily surprised about this opportunity.

And yes, I’ve been able to carry the momentum from NEW INSIGHT—Chip Tom, a curator working with the Hammer Museum, Asia Pacific Museum and Rohrer Fine Arts in Laguna Beach is curating my work in a forthcoming gallery show called "New York School" at Rohrer. We will exhibit the large "Cosmos" piece from Chicago and it’s complement, "Royal Reception" as a pair (a large painting from the Cosmic series) alongside my other new work.

cosmos. 77"x77". oil on canvas. 2008
BS: Peter, at NEW INSIGHT you exhibited 'Cosmos'. Can you tell us about this piece? Perhaps you can describe your process using 'Cosmos' as an example? Tell us about the technical side of your art.

PG: I was interested in conflating macro vs. micro by putting cosmic rings around an organic body. The celestial form is actually derived from a Monarch chrysalis. I also want the viewer to be able to lose himself/herself in the experience of scanning detail. It is my hope that this somehow reinforces the contradictions inherent in the work (macro and micro, nature vs culture, etc).

Technically and conceptually, I admire many types of painting, but personally gravitate toward making crisp pictures with a seductive surface. I realized a while ago that I have a steady hand and a detail-oriented sensibility, so I allow myself to get swept away in the process. My aesthetic relies on the human touch, so everything’s done by hand from the linear minutia to the "sprayed" effects. I like how oil paint is infinitely malleable and can also quote other paint-based media. Ultimately, I strive to make artwork that has intensity.

cosmos DETAIL. 77"x77". oil on canvas. 2008
BS: Nature, in general, seems to be a subject that you enjoy within the context of your art. I've noticed in your recent work that you often mesh aspects of outer-space with that of the nature of Earth. For example, flowers become planets... insects stare into the void of space. Can you discuss the thoughts behind your work and the symbolism behind these choices?

PG: I’d be happy if my work somehow inspires a viewer to contemplate his/her, or even culture’s, relationship with Nature. Arguably, many "developed" societies are increasingly detached from the natural world. I grew up in rural New Hampshire, but now feel incredibly removed from Nature having lived in Beijing and New York. Contemporary life, no matter where you are, provides certain luxuries at the expense of Nature. I think being in a city amplifies this sacrifice: while enjoying the perks of culture, we cannot experience the Perseid Meteor Showers or even pristine air, for example.
My art has become an outlet in which I can meditate upon such issues, which I feel are universal. The corollary obviously is that Nature is indifferent—along with its beauty, it has an undiscriminating, sublime power. My previous body of work, which referenced the seductive forms of toxic plants, tried to get at this duality.

weeping helianthus. 18"x11.5". ink, gouache and pen on paper. 2007
BS: I'm going to take a wild guess and say that it appears you are influenced by Japanese woodblock prints--am I correct in my assumption? Some of your work, like 'weeping helianthus', reminds me of the same type of energy that is captured in those pieces. Can you tell us about some of your influences? Any specific artists or art movements?

PG: Since my parents are both artists, I grew up as a sort of visual sponge. They gardened a lot, took me to places like Giverny (Monet’s former studio and home), and exposed me to culture and travel. I like to think of art-making as a sincere reflection of what the artist sees, thinks, feels and experiences within his/her context. As much as any one aesthetic or movement, I find inspiration in Nature, music, film and literature. Travel has also played a critical role in how it awakens the senses. Studying art and architecture with Cornell University in Rome informed my work, every bit as much as having lived in Beijing during a residency through Red Gate Gallery, or even recent trips I’ve made to the jungles of the Yucatan.

And every bit as much as I’m interested in contemporary aesthetics, I’m interested in how it’s all linked to a greater continuum of the human condition. It’s hard to articulate, but I think I’m drawn (no pun intended) to the harmonious and holistic quality of Chinese and other Asian art forms (whether it’s painting, printmaking, craft, landscaping or architecture). Since contemporary life can be overly complicated, I’m attracted to the centered, harmonious sensibility in Asian artwork—one might even call it spiritual. I think it’s quite sophisticated.

PG: Yes, I have a jazz guitar background, but have also played in Afrobeat, funk, experimental and electronic groups. There’s nothing quite like performing music live—it’s a direct connection and participation with your audience that’s less common in visual art. Contrary to all the signifiers each decision carries in painting, notes just represent themselves in music. As an improviser, I also like the notion of improvising in and out of a structure and developing themes.
The pattern-based, "energy-field" areas of my work are improvised within the context of an artwork, so I’d like to think there’s some relation. Other moves in my work are improvisational as well, although I feel that’s often not apparent to the viewer. Analogous to jazz, it’s fascinating how the best players and artists can turn a mistake into something that seems intentional. I certainly aspire to that.

I’m also intrigued by the overlap of sound and color, or synaethesthsia. I recently tried exploring it further by developing a computerized color-sound system based upon Newton’s color wheel and inspired by Louis Castel’s "light organ". I’ve had to put it on the backburner for now.

BS: What are you working on at this time? Also, where can our readers view your work in person? Are you open to studio visits if their are any interested parties?

PG: I’m finishing a project of unique etchings for a show called "UNFRAMED" at Charles Cowles Gallery in NYC, that opens May 19th, curated by Beth Rudin DeWoody—it’s a benefit to raise money for AIDs research. The "New York School" exhibition at Rohrer Fine Art in Laguna Beach opens mid-summer and I’m cranking on new paintings for that. I’m simultaneously finishing a triptych commission for a NYC-based collector, while experimenting with some new mixed-media works-on-paper that I hope to turn into a wall installation.

Seeing my work online at http://www.petergerakaris.com/ is obviously meant as a precursor to seeing it in the flesh. Some of these new projects will be on view at the above shows. And yes, I enjoy studio visits.

New Ring of Dahlia, gouache, ink and graphite on paper, 15 x 15 in.
BS: Finally, as I know you are most likely rushed for time... is there anything else you would like to say about your art or your future goals?

PG: As I continue to push my work personally, I’d like to continue exhibiting and to broaden my audience. Professionally, I’m interested in developing more gallery relationships as well as having the opportunity to connect with larger audiences through both the public sphere and institutions like museums. Artistically, I think it could be rewarding to undertake the challenge of a large-scale, site-specific project.

For instance, "Spectrumorphosis", a one-person site-specific installation I made last year at Wave Hill’s Glyndor Gallery and Botanic Gardens in NYC whetted my appetite. The variables of site-specific art, such as a new audience or the architecture of a site, can create a call-and-response that allows the work to become greater than the sum of its parts. And I never want to stop traveling, as I find it immensely transformative.

You can learn more about Peter Gerakaris by visiting his website-- www.petergerakaris.com. You can read more of my interviews by visiting the following page-- www.myartspace.com/interviews.

Just a note to say how much I enjoyed the fine, masculine paintings of Peter Gerakaris. His work is more than refreshing and his talent is obviously huge. It is artists such as Mr. Gerakaris who will make a mark in the real world of art (as opposed to the blatantly fake and hookey world of art, mainly seen in Soho and Chelsea for the most part), with a high caliber of sensitivity, authenticity and beauty, so desparately needed in our American culuture, in our American country and in our American lives. Your work, Mr. Gerakaris, is an inspiration to all of us. Hopefully, you will have a wide, dare I say it, "universal" audience so that each us, tall and small, earthly and divine will have the opportunity to witness and deeply appreciate what I will call your profound genius. Thank you. Anyone associated with you has a great deal to be proud of and to look forward to.

Peter's work is amazing. I love the color and movement. Carol Caputo .thanks for sharing .

Peter Gerakaris is intelligent and articulate, his work reflects an understanding of the immutable pleasures of working with oil paint and the idea that working 'by hand" (as opposed to the printer)gives the work a radiant timeless energy.

He is one of those artists that reminds me that painting lives and breathes still.