Art Space Criticism: Is Banksy an Activist or an Artist?

Responding to a recent comment on my blog, I thought I might talk a little bit about Banksy, who does seem to be pretty popular these days.

Banksy (his official website with many images) is a contemporary artist/activist who “defaces” various contexts or objects, creating elaborate graffiti works in urban landscapes, secretly placing unauthorized artworks into exhibitions, or reconfiguring kitschy store bought paintings (see Tim Hawkinson's earlier works). Like many graffiti artists, Banksy’s identity is a secret, ostensibly to protect him from prosecution or jail time, although it’s known that he’s a white male (I think). In his work, Banksy repurposes popular icons or images, employs a direct, illustrative style, and gives his images the theatrical effect of actually existing in the viewer’s space. And while his subversion of popular culture (culture jamming) isn't so new (1989 - Adbusters first published), his creation of large-scale stenciled graffiti seems somewhat innovative in graffiti history (as far as I know…). And Banksy's use of photography and the media to disseminate his images around the world (not unlike Maurizio Cattelan, et. al.) is interesting. A longer, better biography is available (as usual) at Wikipedia. 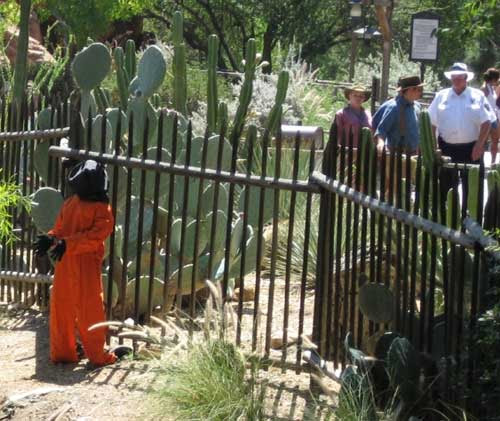 Now, for me, I find Banksy's work kind of confusing. Because if I think about it as art, I'm bored. But, if I think about it as activism or culture jamming, it's pretty good. Strange, right? I think this goes back to beliefs about art that inform my criticisms. Like, I think "good art" is an innovative play of forms (visual, conceptual, social, etc.). In this way I think art can discover things and doesn't have to illustrate things we already know. Like, if Banksy puts an inflatable detainment camp prisoner in Disneyland's Big Thunder Mountain Railroad ride (ha! See above), he's using site specificity (70's art) and a collage of visual icons (Hannah Hoch's dada collage) to talk about American insularity in a time of war. And that's a fine topic to draw attention to. But I think art can be more than just drawing attention to popular issues through familiar art techniques. Like, I think art can anticipate or identify issues we're not even aware of yet...

But, for a moment, I'll compare Banksy with my idea of good art: an innovative play of forms. Well, his work doesn’t really make use innovative materials (seen any new media graffiti recently?) or use its site(s) in a very sophisticated manner (whoa, it’s like the angel’s actually IN the doorway!). And, often, the content is a little thin, since he attacks big, easy targets (Paris Hilton, Disneyland, the London Zoo) and prefers explicit images (Worry, don’t be happy). Like, what can I say about art that wants to critique Paris Hilton?

So, let's consider it activism, like, take his work on the Israeli West Bank barrier. His work there appealed to our basic humanity and/or our love of basic clichés (i.e. walls should be knocked down…), and simplified a conflict in which the West’s interventions are already controversial (do Palestinians really need Banksy’s opinion/intervention, too?). But at least he was willing to make a stand and put his ideas out there, get feedback, and get it all on the BBC. And while the work may not be breathtakingly insightful, it probably incited more dialogue and coverage for an unacceptable situation. And that seems pretty good to me (not that anyone cares what I think...).

So, in the end, I see what Banksy does as a kind of activism, a vague definition: drawing attention to issues through artistic techniques. But I don't think it's great art. But Guernica, that's great art...right? 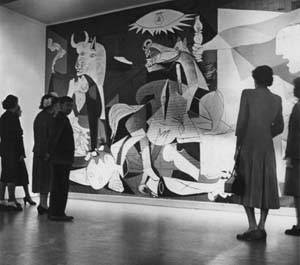 so your saying that expressing emotions through art is not art? Some people actually care and have emotions for the fucked up shit in the world. THAT IS WHAT ART IS. art is expressing yourself and gives a visual of who you are. BANKSY FUCKIN CARES FOR THE WORLD. that is who he is and he expresses it through politically correct graffiti. you don't understand art

I dare say it is difficult to know exactly what Banksy is thinking since he is such a recluse. Not to mention that when you add big price tags to visual opinions people are bound to question if the art is about the message or the money.

Also, it is naive to suggest that any one person understands the whole of art. The appreciation of art is based laregly on opinions-- and everyone has one. Keep in mind that some artists-- hell, some art movements-- did not focus on emotion at all. Not every artist is focused on the expression of feelings-- that falls under the myth of the artist... that all artists are somehow sages of emotion.

well, a lot of emotion out there in defining art - or ART! Caring for the world is not art, that much I know. Art could for instance be what you say when there are no words for it. It takes a little more than 20 seconds to decipher a meaningful art work. In fact, it takes a whole generation to do it properly, which is why so much Brit Art is finding its way out of the vaults and into the garbage can. Is Banksy's work ART? Why dont we ask him?